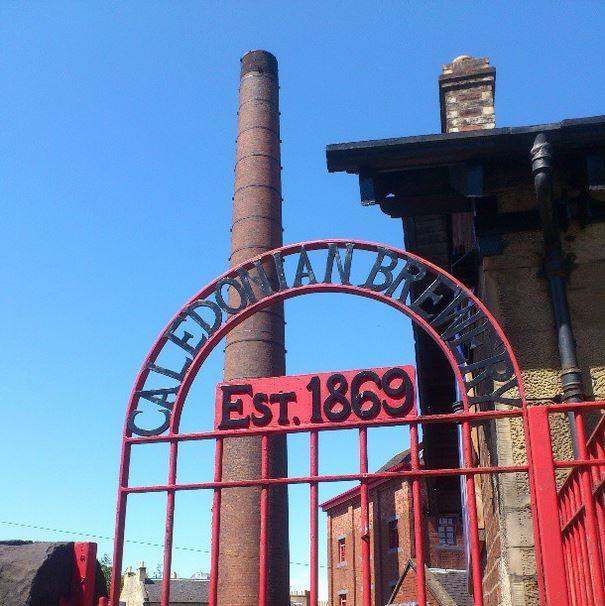 I’m not even sure where to start this post…it seems wildy random I know! Essentially I was in a client meeting in the rather awesome Caledonian Brewery in Scotland (years ago) and we were discussing Burns Night. I’d never attended an official Burns Night celebration or really knew what that involved but was happy to mark the occasion with a tasty tea of haggis, neeps and tatties. We’ve Scottish ancestry in our family and even a Blaylock tartan (my maiden name) so I’ve always felt like I’ve had some sort of Scottish connection. However nothing could’ve prepared me for the question or rather request which came next. “We’re looking for someone to do the “Response from the Lassies” – queue blank expression on my face but trying to politely smile. My boss at the time, who is in fact Scottish, smiled and animatedly carried on the conversation with the client as they reeled off the list of names volunteered for the various speeches traditional for a Burns Night supper. The next minute of fast-paced chat seemed to end with the words…“I’m sure Charlotte would love to do the Response from the Lassies.” You know that moment when you’ve zoned out slightly in a meeting because quite frankly everyone is talking about something you know little of in an overly familiar manner at about 90mph in a thick Scottish accent…that.

Anyway my boss totally downplayed the significance of such a commitment on the train journey home whilst I frantically googled what this is all about. I can’t for one minute claim the response you see below is all my own handiwork, there was a lot of copy and pasting going on from various other speeches I’d googled so apologies for the serious amounts of plagiarism, I wouldn’t be scoring top marks if this was a Uni essay. Anyway it turns out there were plenty of other people who had unwittingly agreed to write and recite the same traditional Burns Night Response so there was plenty of inspo online. A response I might add which is expected to be tailored to your specific event, reference people in the room, be a response to the Toast to the Lassies and most horrifically…make people laugh. (Many a sleepless night ensued worrying about people staring at me blankly with not even a glimmer of a smile let alone a laugh!) My fab family also helped out after a pleading message to the all-family Whatsapp so there’s some seriously random lines here from them too.

So if you’ve never been to a Burns Night picture the scene – room full of people (in this case my clients, their colleagues and various other invited guests) drinking and eating delicious food, traditional poems celebrating the life of Robert Burns and a very animated tartan-clad man weilding a sword whilst leaping round the room doing the Address to a Haggis. The latter is an absolute feast for the ears and the eyes and a performance I shall never forget. So anyway my time came, I stood, I spoke (slower than I think I’ve ever spoken in all my life) and thankfully there was laughter. In hindsight I feel honoured to have been a part of the evening and not to have made a total fool of myself. After the formalities were over and everyone was ordering another round, a young Sales Rep from Yorkshire came over and said – your speech was amazing and basically the only thing I’ve understood all evening – which did make me laugh. Annoyingly I can’t find my final copy of the speech but did come across this draft version which looks to be mostly all there, minus a few more references to people in the room, so without further ado… oh and yes in the shot below the person looking pensive at my speech attempt is best selling crime writer Ian Rankin… no pressure…. 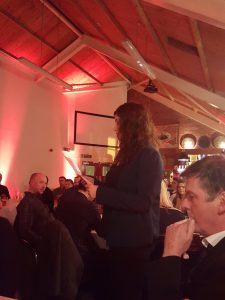 I’m straying from convention so please bear with me. I’m not a poet by any stretch of the imagination but seemed fitting as we celebrate the life of Scotland’s beloved bard….

As I start my speech this evening

I fear that my reply

May cause some consternation

I hope though, no outcry

A man deserves to be rebuked

The first, Colin is his name

The second, they call him Mitch

He smiled and with a look of glee

Asked of me just this…

‘I would be honoured’, he said

‘On behalf of Lassies’, he said

So casual, by the by.

To say that would be fine

It’s a shame that I had no idea

Of the stress that would be mine

I’d thought this speech was something quick

that I could find online

And print off, just before I came

And read out, at this time.

Yet only a few days ago

To Mr Google’s aid I turned

He said I had to write my own!

None was supplied by Mr Burns

The ‘reply’ required a lot of thought

It was to be new each time

It wasn’t something he churned out

Not one of his five hundred and fifty-nine

Yikes, I cried – this isn’t right

This is an awful affair

Have they any idea how long it took

Just to work out what to wear?

And glancing back at that webpage

T’was with horror that I saw

That grace and charm and wit were required

Don’t you know me but at all?

I stand before you a Yorkshire lass

This the first Burns night I have been

An experience I’d hoped to enjoy

Beer in hand, not being seen

But so I bravely battled on

Back to Google’s help I turned

My ever present buddy in life

So much from him I’ve learned

Reveal, he did, ‘Replies’ of lassies

From Burns nights of the past

Please picture the horror on my face

On reading: 15 minutes it should last.

Don’t panic tho, I quickly thought

That this I’d just dismiss

Fifteen minutes of me, I fear

Is no one’s idea of bliss

And furthermore it was revealed

‘Men’ I must show as fools

Whilst also referring to Roger himself

Tell me – who makes up these rules?

And what to say to show men up

To make them sound less wise?

A man can be a useful thing

No woman will deny…

They work so hard from dawn to dusk

And still put dinner on the table

And sort the kids and clean the house

Oh… whoops – that’s us lassies that are so able.

But men are… they can help round the house.

When from the TV they’re dragged

And they… can be good company

They’re handy… if you need a good nag.

I think men quite alright

Despite conning me into doing this

Or laughing at my plight

And as for Burns that famous Scot

A real one, not just in part

T’was two hundred n fifty years ago he was born…

And a bit later, he did depart

The bit in the middle, it seems to consist

Of flirting and being a tart

But he sought out some time to write stuff down

Which now is considered pure art.

He was a huge champion of women

He adored them, some would say

Adoring too many at any one time though

In fact he could be seen

the shining example that all men

But only when it suits them

My Nanny tells the tale

Married and expecting her first

But there must have been a ploy

Three daughters he was given

But Burns it was a different story

an impressive record he did set

In 13 years no less achieved

Some would say fine living

Others would be peeved

Without the aid of match.com

Or even that awful Tinder one

He wooed with poetical words

and even the occasional song

But adore them he did,

with poem after poem

Dedicated to us lassies

And for that we can forgive

Sadly he lived only 37 years

Just imagine had it been more

So laddies count yourself lucky

That his isn’t the ultimate score

But all this jesting you must forgive

For Burns was truly wonderful.

For that we raise a tumbler full

capable of a Scottish accent

Well, my poem is done; it turned out to be fun

My panic was clearly in vain

But just so I’m clear, when you have one next year,

Please don’t make me do it again

So, lassies of the room, I invite you to stand and raise